Living water for a thirsty world
1

Living Water 414 & Amerindian Missions
Intertwined But Connected
The question occasionally arises how Living Water 414 should be distinguished from Amerindian Missions. In the short-term, Jerry looked for a Timothy immediately to learn the work more while he had good health. This requirement trumped his need for several full-time workers to aid him. At the beginning in January 2014, we were two workers with different roles, each having our own sponsoring church and sources of funding. That die was cast at Jerry’s direction.
However, in the long-term, Jerry had known—having labored in several mission fields since the 60s—that a missionary teaches, trains and equips others until he is no longer needed. Then he moves on. Jerry plainly said, “David, the job of a missionary is to work himself out of a job.” Living Water 414, therefore, is the future vision beyond the mission to a localized people. Amerindians will likely need for a great while some financial assistance to evangelize their own people on a large scale. But if we succeed in anything, then the day will come when we do not have to hold their hand.
Living Water 414 and Amerindian Missions have always complimented each other with different focal areas and have never competed for anything. For the 7-10 churches that have sent funds to both the Richmond and Summerdale churches of Christ for several years, they have understood that Living Water 414 is Richmond’s global outreach, no matter the area. Since we are solely in Guyana currently, what we do since Jerry’s retirement is Amerindian Missions. At this point of understanding the complimenting difference, one seasoned campaign veteran asked, “So, Living Water 414 is broader than Amerindian Missions and can even be bigger in scope?” This has been the vision from the beginning.
Since stepping into Jerry’s shoes, everyone has been so supportive and patient during this transition. Some have begun sending their dollars to Richmond. Despite a $2,717.00 monthly shortfall to Amerindian Missions, we have had to add four part-time preachers for the stability of local churches. Those amounts are $100, $200, $300, $300 per month, and they began this fall. Commenting on this pay, Jerry would often remark, “I wouldn’t work for that amount, and you wouldn’t either.” Currently, we support 27 workers at a total of $6,200 per month. The health and vitality of the entire work depends upon it.
Amerindian Missions Calendar
November 28 - December 5
Lethem, Region #9
Preachers' Seminar
Assist new preachers
Survey benevolence projects
Wakenaam Island, Region #3
Break ground for building construction
St. Cuthbert's Mission, Region #4
Survey the welfare of the church
February 25 - March 11
Region #9
Marurunau Village Campaign
June 17 - July 1
Region #5
Moraikabai Village Campaign
October (TBA)
Region #9
Parashara Village Campaign (?) 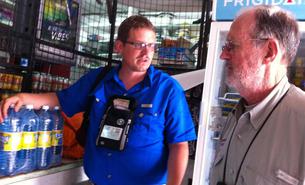