Living water for a thirsty world
1

Guyana, a tropical country on the northern shoulder of South America is 215,000 square kilometers in area. It is approximately the size of Great Britain or the combined size of the states of New York, New Jersey, Connecticut and Massachusetts and is bordered by Venezuela, Brazil, Surinam and the Atlantic Ocean.
Behind Guyana’s coastlands lies a wide belt of tropical rainforest, thought to be the world’s most virgin, and beyond that lies extensive savannahs. Both regions include attractive mountain and plateau terrain, with spectacular escarpments in places, most notably on Mt. Roraima. This was the setting for Conan Doyle’s fictional “Lost World”, supposedly inhabited by dinosaurs like an earlier “Jurassic Park”, but in reality the site of a unique and still not fully explored ecosystem.
This “land of Many Waters” has four major rivers: the mighty Essequibo, the Demerara, the Berbice, and the Corentyne, and innumerable smaller rivers and creeks. Kaiteur Falls, where the broad Potero River thunders down into a great forested gorge, is four times the height of Niagra Falls and is the world’s highest single drop water fall. It is undoubtedly one of the world’s most impressive natural wonders.
Most Guyanese live along the coast or the lower reaches of the major rivers, where three of the country’s major economic activities, sugar, rice cultivation and bauxite production, are concentrated. The interior of the country is settled mostly by Amerindians who engage in small scale agriculture, fishing and hunting for their livelihoods, together with some ranching. There are over 145 of these small Amerindian villages. The remaining interior population consists of temporary or shifting labor, who engage in gold, diamond and timber workings.
The main centers of population are reasonably well linked by paved roads and vehicle ferries across the Essequibo, the Berbice and the Demerara Rivers. The Demerara is also crossed by a bridge just below Georgetown, the capital city. Access to the rest of the country is by air or river transport. These are difficult in many places because of rapids, waterfalls and other hazards, but correspondingly attractive to those who seek adventurous recreation.
Access to the country from outside is mainly by air through the Cheddi Jagan International Airport at Timehri, but a motor able road north from Brazil to the coast is also an option. Cargo movements are mostly through Port Georgetown, but ocean going vessels can navigate the lower reaches of the major rivers, in some cases for more than fifty miles. 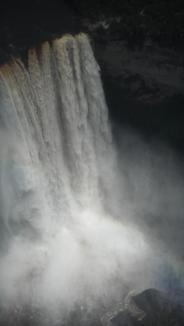